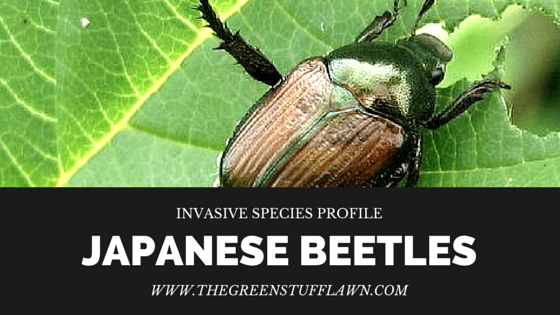 Compared to a few years ago, Japanese beetles have fallen out of the news. However, they can still be found in the Twin Cities.

Japanese beetles (JB) are a species native to northern Japan, notorious for feeding on and destroying the roots of more than 300 plant species. The first record of Japanese beetles in the United States was in New Jersey in 1916. Numerous cases have been reported in the Twin Cities.

Adult JBs have a dark metallic green head and dark metallic tan wings. Fully grown, these insects are about 3/8”. Larvae and adult JBs are detrimental to plants in different ways. The larvae feed on the roots plants and the adults feed on the leaves of plants, working their way between the leaf’s veins.

Japanese beetles have not made their way across all of the United States, but you can find them localized in certain states (Minnesota, Georgia, and Maine to name a few). JBs are not picky insects; their palates can handle over 300 plant species, from maple trees to Rose bushes.

You will start to see JBs this month and stop seeing them by the end of August. However, while you won’t see the beetles, the larvae feed on roots and soil the rest of the year.

A voracious appetite for hundreds of plants makes Japanese beetles a threat. If a plant is exposed to JBs in addition to other stress (storms, drought), it is unlikely the plant will be able to recover.

HOW (CAN I TELL IF MY LAWN IS INFESTED)?

Due to the way adult Japanese beetles eat leaves, it is relatively easy to recognize infestation. Your plant’s leaves will be intact, but skeletal. If you have turf grass in your lawn, you may notice it some unhealthy spots in your yard.