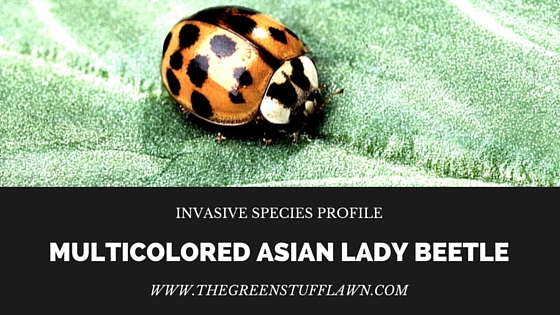 Multicolored Asian lady beetles (Harmonia axyridis) are native to eastern Asia, and were “formally” introduced to the United States in California, by the U.S. Department of Agriculture in 1916. Asian lady beetles are part of the cocconellid family, which is not only indicated by their bright colored wing covers, but also by their voracious appetite for aphids.

Adult multicolored Asian lady beetles are approximately 7mm (1/3”) in length and have a characteristic “M”-shaped marking on their heads. They can vary in color and number of spots, from light orange with no spots to red with nineteen spots. Usually, you don’t know you have a lady beetle “problem” until you actually see the little guys flying around.

Multicolored Asian lady beetles are most prominent in the fall and spring, when cooler temperatures swiftly change to and rise above 65 °F. “But what about in the winter?” you may ask. Well, these beetles take shelter in cracks and gaps in housing structures and remain dormant until their environment gets warmer. The bugs you see in your house aren’t spawning; they just house there and get trapped inside buildings when winter arrives.

Honestly, multicolored Asian lady beetles don’t do much harm to plants, but they are major nuisances to the general population in their homes and workplaces. These beetles are known to bite. Their bites aren’t lethal by any means, but it will be uncomfortable like a mosquito bite. They also don’t smell very nice when you squish them, and dead beetles have historically caused allergic reactions to some people.

HOW (CAN I TELL IF MY LAWN IS INFESTED)?

Your lawn won’t really see damage, but you’ll definitely notice an infestation in your home. You can tell you have a lady beetle problem because you can see them.

Preventing an infestation is as simple as repairing cracks or holes in your walls, resealing doors and windows, and repairing window and door screens. If you aren’t able to prevent the beetles from coming in, the best way to remove them is by vacuuming them up. Just remember to change the bag more often.

The University of Minnesota Garden Extension also suggests this simple – and effective – method of beetle removal via vacuuming:

Figure 1. A nylon stocking inserted into a vacuum cleaner extension wand creates a handy bag for capturing lady beetles. Options also are to (A) rubber band a piece of nylon over the flexible hose to prevent lady beetle entry into the vacuum cleaner, (B) secure a nylon stocking (open at both ends) inside the foremost section of the wand to somewhat cushion the lady beetles and prevent staining. Diagram courtesy of Ohio State University Extension.